Exeter’s latest addition to the special collections is a letter dated 1822 from Alexander Dyce ( 1798-1869) to C.E. Walker, then a student at Exeter College.

The letter takes the form of a humorous poem in eight verses and refers nostalgically to term time habits and acquaintances: 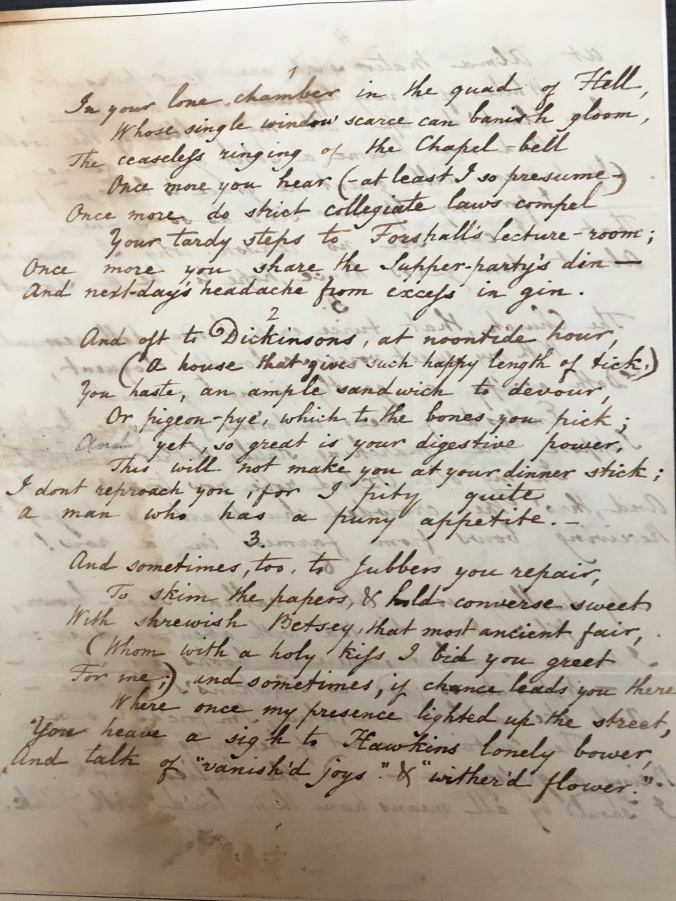 In your lone chamber in the Quad of Hell,

The ceaseless ringing of the Chapel-bell

Once more you hear (- at least so I presume)

Your tardy steps to Forshall’s lecture-room;

And next day’s headache from excess in gin.

Alexander Dyce studied at Exeter College from 1816 to 1819, graduating with a third in Classics. The Forshall he refers to is Josiah Forshall (1795-1863) administrator at the British Museum, who was elected a Fellow of Exeter in 1819 soon after his graduation and tutored there from 1822 to 1824 prior to his appointment as the assistant librarian in the Department of Manuscripts of the British Museum.

After graduating, at his father’s insistence, Dyce was ordained as an Anglican priest and served in curacies at Lanteglos near Fowey in Cornwall from 1822 to 1824. The letter shows that he had mixed feelings about his position at Lanteglos and longing for the literary life in London which he was to take up in earnest in the summer of 1826.