One of the most interesting items found deep in our rare books stack is a remarkable one – a 17th century album of pressed plants.

I came across this book last year and it was curious to pick up a large leather-bound volume expecting it to be heavy and to find it instead very light. When opened the book revealed page after page of carefully arranged dried plant samples – a ‘hortus siccus’ (literally ‘dry garden’) as these albums were commonly called at the time ours was made.

The name of each plant is written in both Latin and English in a seventeenth century hand, but apart from this and the faint lettering ‘hortus siccus’ on its spine, there is no indication of who might have put this fascinating book together.

A trip to Oxford’s Herbarium, where similar plant albums are kept, revealed some clues: the handwriting in Exeter’s volume was not familiar to the experts at the Herbarium so our album had not been made by the famous Oxford botanists Jacob Bobart the Elder (c.1599-1680) or Jacob Bobart the Younger (1641-1719). However, the binding is the same as that of the Bobart the Younger’s  albums (perhaps a local Oxford binder) and the paper used is also the same. The glue used to attach the specimens is however of a different type, darker and more brittle.

The Herbarium were able to date Exeter’s album as having been made sometime between 1670 and 1700.

It was most probably the work of a medical man, but the plants chosen are not obviously medicinal plants and neither do they conform to the ‘doctrine of signatures’ (the medieval belief that ‘like cures like’, that the plant remedy resembles the part of the body it cures, so walnuts (resembling a brain) would cure mental illnesses for example).

There are no cultivated plants. The samples in Exeter’s album are all wild plant varieties which would have grown locally in Oxfordshire. 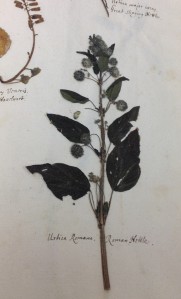 Their English names are charming: the stinking gladwyn or iris (said to smell of roast beef), white flowered maudlin (named for Mary Magdalen), small and great periwinckle, great golden maidenhair. There is also a sample of Wolf’s bane, a very poisonous plant sometimes called the Queen of all Poisons, or the devil’s helmet.

Despite having survived for over 340 years, most of the plant samples are in surprisingly good condition. There is evidence of some old insect damage, and the album was frozen at minus 30 degrees for a week by the Herbarium to make sure no insects survive between its pages.

It is tantalising to think of who might have compiled this plant album. Was it a member of  Exeter College? A friend of Bobart the Younger? Perhaps a visitor to the University of Oxford’s Physic Garden (then about 30 years old)?

The Register of the Rectors, Fellows, and other members on the foundation of Exeter College Oxford by the Rev Charles Boase (Oxford, 1894) mentions a possibly likely candidate, Lewis Stephens, Exeter’s Chaplain 1678-81. He was not a medical man but he was described as ‘famous as a botanist’. Could the Rev. Stephens be our anonymous plant collector?