From the College who gave the world the Jack Russell terrier, thanks to its famous alumnus the “sporting parson” Reverend John (“Jack”) Russell, hunting is the theme this week. 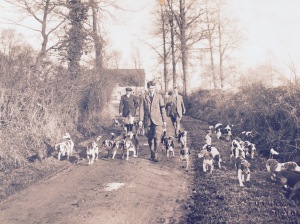 Exeter has a rare copy of a little book called ‘The booke of haukyng huntynge and fysshyng, with all the properties and medecynes that are necessary to be kept.  [1556?]

It is actually  an expanded edition of an earlier work known as ‘The Book of St Albans’, printed in 1486  and, interestingly, thought to be the work of a woman, Juliana Berners or Barnes, the prioress of St. Mary of Sopwell, near St Albans (fl. 1460). It is not certain that Juliana was the author, but the assumption has arisen because hers is the only name mentioned in the work: at the end of the second part, a treatise in verse on ‘the manere of huntynge for all manere of bestys’  from a ‘Dame’ to her sons, there are the lines: Explicit dame Julyans Bernes doctrine in her boke of huntynge

It is full of all kinds of detailed advice:  everything you would ever need to know about falconry ‘to speke of haukes from an egg tyll they ben able to be taken’, how to find and catch your bird, how to make a medicines from the juice of fern roots to cure a hawk of ‘unlustynes’.

The author describes the best kind of horse and the perfect hunting dog. There is also a glossary of hunting terminology- how you should properly refer to a ‘a busyness of ferettes’ and  a ‘couple of spanyelles’.

The third section of the book ‘a treatyse of fysshynge with an angle’ was added ten years after the original edition was printed. It is actually the first known work on fly fishing and over 150 years later it was an influence on Izaak Walton, author of the famous ‘Compleat Angler’. The author describes each fish, for example the ‘gentyll’ salmon, the ‘right beauteous’ trout, and the unpalatable barbell which may be caught in March and April with a bit of fresh cheese: ‘the barbell is a swete fish but it is quaysy and perilous for a mannes bodye. And yf the flesshe be eaten rawe, he may be cause of manns death which hath often tymes benne sene’

The book was reprinted in many later editions. Exeter’s copy, thought to have been printed in 1556, is possibly one of only three in existence.