College betting books were a common feature of collegiate life in Oxford. They record all the wagers made between Fellows in the Senior Common Room (SCR) and they are a mine of historical detail, evoking a world of collegiate friendships and rivalries, political debates, idle conversation after dinner and gentle teasing while on a boat on the river or lounging on Portmeadow. The bets generally follow a common formula – X bets Y a certain stake (usually bottles of wine or port) that something will or will not occur.

Exeter College’s first SCR betting book begins in 1812 and runs until 1837.  The nature of the bets recorded illustrates the ‘genteel but not intellectual’ ethos of the College in those days. 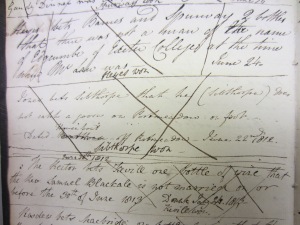 The book was presented by Humphrey Waldo Sibthorpe, who features in many of the early bets, including winning one that he would catch a goose:

“Jones bets Sibthorpe that he (Sibthorpe) does not catch a goose on Portmeadow on foot. Dated – Houseboat off Portmeadow, June 22nd 1812. Sibthorpe won.”

There is a later bet on how many throws it would take to hit a willow tree:

Forshall bets Yonge that he hits the willow on the other side of the river in ten throws. April 16th 1822. Forshall won. 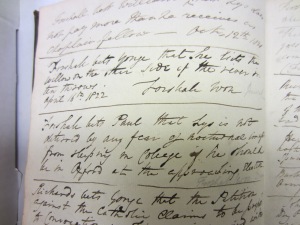 Bets on the matrimonial chances of the Fellows, who had to resign their fellowships on marriage, and on sporting feats, reflect the relative youth of the Fellowship at that time. There are early signs of Exeter’s future prowess in athletics (the College formed the first Athletics Club in the university in 1850) in bets on races between milestones at Kidlington in 1817, and a failed bet that Exeter’s boat, the White Boat, would be Head of the River in 1831. 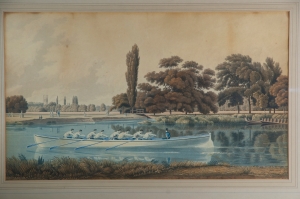 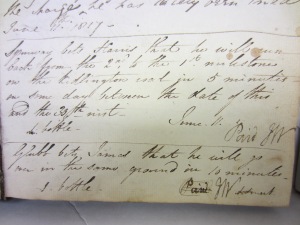 There are bets in 1820 on the cost of furniture for the Common Room, and that the two pear trees in the garden would produce 200 pears in one harvest.

Betting on the number of pears 1820

Fellows also wagered (rather rudely) on the weight of one of their number:

William Dalby, who matriculated aged 15 and was made a fellow 3 years later, aged 18, took on a bet in November 1812 to give the number of volumes in the Library within thirty minutes. The outcome is not given. 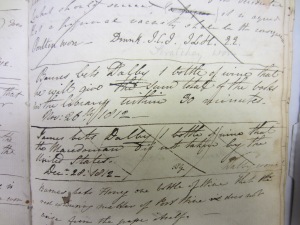 How many books in the library

The bets touch on national politics as well as College life. In the early period there are many bets on the situation in France and the outcome of the war with Napoleon. One bet in March 1815 predicted that ‘ Buonaparte will be in possession of the country from Cologne to Basle by 1st July ‘ and a later one speculated on his ability to escape from St Helena within a year of arrival. 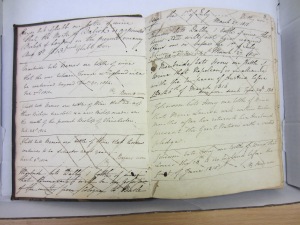 Interest in domestic politics are seen in bets on the position of the prime minister (Lord Liverpool) and taxes, including the Property (or income) tax, introduced as an emergency tax during the French Wars and retained after 1815.

Election pledges were also scrutinised and a bet on the repeal of the Malt Tax in 1835, to produce a list of MPs who had voted against their election pledges in order to support Robert Peel, has echoes of more recent political U-turns. 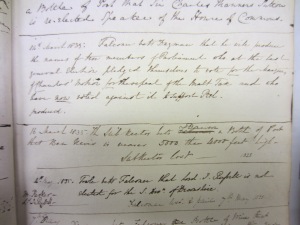 This page also includes a bet on the height of Ben Nevis and an election result in Devon.

Bets on coronation of George IV

Interest in the  activities of the Royal family resulted in bets in 1820 on cries of ‘Long Live Queen Charlotte’ at the coronation of George IV and the outcome of the Parliamentary enquiry into his queen, Caroline of Brunswick. 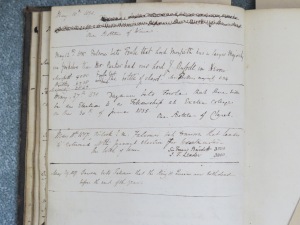 And the final entry in May 1837 predicts the death of William IV and his consort, Queen Adelaide before the end of the year. William did die on 20 June 1837 and was succeeded by his niece, Victoria.  Adelaide, who had been dangerously ill in April 1837, recovered and lived as Queen Dowager until the age of 57, dying in December 1849.